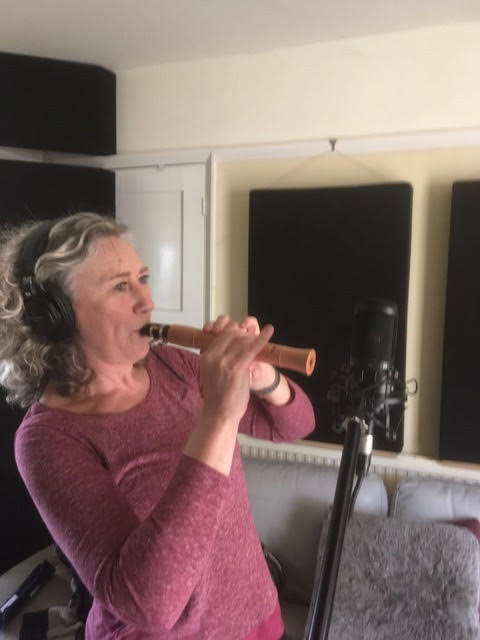 I bought a new saxophone last week – a “pocket sax”!  It’s rather an odd looking object…and despite its name, it doesn’t look OR sound anything like a saxophone. There’s no shiny lacquered brass – just a plain wooden body resembling a recorder, with a clarinet mouthpiece stuck on the end…and blown gently it emits a soft sound reminiscent of an ethnic flute.

Cydnie B breezed in as I was practising my new purchase, and seemed enthusiastic to hear more about it. However, I could feel her quickly regretting this show of interest as I launched in to one of my informative speeches: “Did you know…. the iconic saxophone that the brilliant Adolphe Sax brought into the world in the 1840’s was also a result of instrumental cross-breeding. He experimented with a woodwind mouthpiece on a brass body….” I still had lots of fascinating saxophone history to share with her, but I had lost her. She deftly collected her candle-making equipment (exciting new her&her merch!), made her excuses and left.

It was then that an idea occurred to me…I suddenly felt inspired to follow in Adolphe’s footsteps. “I’ve got lots of old mouthpieces that I can afford to ruin in the name of creative invention” I thought…”and how hard can it be to find some new ways to hybridise? Hmm…designing a “shrubshallphone” could be the life purpose I’ve been searching for?” (Shrubshall is my surname in case you’re a bit lost here).

Anyway…back in the room…the good news is that I absolutely ADORE my pocket sax. The weird hybrid has already caused a stir in Richard’s recording studio, proving that it may just be the best 50 quid I ever spent! Who could have conceived that such a peculiar looking creation could be soooo versatile…blending beautifully with any musical texture we throw at it, as well as providing some cracking solo lines and quirky animal noises too! Another plus is that it’s small, light and hardly requires any air…life-changing stuff! (anyone interested in buying my heavy baritone sax?)

Following on from its triumphant recording debut last week, the pocket sax is now poised to perform live at the next ‘her&her’ Sound Spa on Thursday  (April 11th) in Tendring’s Village Hall.  Essex is in for a treat!

This website uses cookies to improve your experience while you navigate through the website. Out of these cookies, the cookies that are categorised as necessary are stored on your browser as they are essential for the working of basic functionalities of the website. We also use third-party cookies that help us analyse and understand how you use this website. These cookies will be stored in your browser only with your consent. You also have the option to opt-out of these cookies. But opting out of some of these cookies may have an effect on your browsing experience.
Necessary Always Enabled
Necessary cookies are absolutely essential for the website to function properly. This category only includes cookies that ensures basic functionalities and security features of the website. These cookies do not store any personal information.
Non-necessary
Any cookies that may not be particularly necessary for the website to function and is used specifically to collect user personal data via analytics, ads, other embedded contents are termed as non-necessary cookies. It is mandatory to procure user consent prior to running these cookies on your website.
SAVE & ACCEPT